Forget Vim tabs – now you can have buffer tabs

<div align="center">
A well-integrated, low-configuration buffer list that lives in the tabline 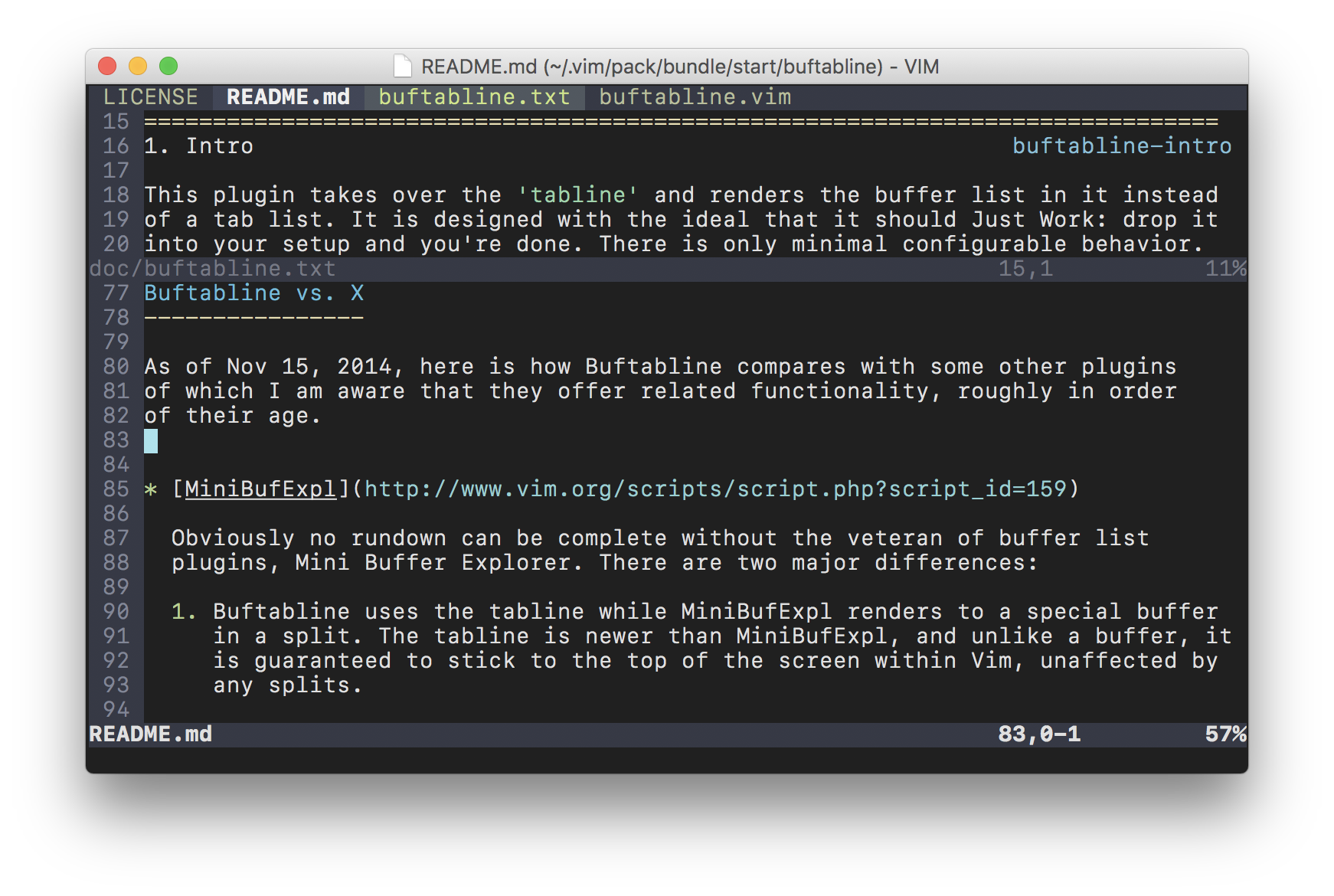 If you don’t know anything about buffers, the minimum you have to know is that
a buffer in Vim essentially means a file, and if you set hidden, Vim can keep
files open without necessarily displaying them on screen. You can then use the
:bnext and :bprev commands to change which buffer is being displayed in the
current window, and :ls to look at the list of buffers.

If this is all news to you, you should probably add this to your configuration:

Why this and not Vim tabs?

Vim tabs are not very useful except in very particular circumstances.
To understand why this is, you have to understand that the display in Vim
has 3 layers of indirection:

Not necessarily to files on disk, but in potentiality; i.e. a buffer becomes
the content of a file when you do :w

Any window can be associated with any buffer, and any buffer with any

Note that while windows are always associated with a buffer - i.e. an area
of the screen always shows some file –, a buffer need not be associated with
any window – i.e. a file may be loaded without being shown on screen.

In other windowing environments this concept is often called a viewport,
or a virtual desktop. Each window belongs to one particular tab. But note
that a buffer can be shown in any window (or no window at all), so any file
can appear any number of times in any number of tabs. Tabs and files do not
have anything to do with each other.

Now it is possible to open just one full-screen window in each tab, and in each
window edit a different buffer, in effect associating tabs with files. But this
only works if you stay away from any other window or buffer management, i.e. if
you never create splits and never touch the buffer list. Even then there are
parts of Vim (such as the help function and the netrw Explorer) that expect to
be working with windows, not tabs, and so can easily inadvertently shatter the
illusion.

So if you consider what Vim tabs actually are, i.e. viewports, and you use Vim
in a typical way, there are only very limited circumstances in which you will
ever need such functionality, if at all.

What the typical user wants when they think of tabs is simply the ability to
open multiple files and then flip between them, which in Vim means they want
buffers – not tabs.

As of Nov 15, 2014, here is how Buftabline compares with some other plugins
of which I am aware that they offer related functionality, roughly in order
of their age.

Obviously no rundown can be complete without the veteran of buffer list
plugins, Mini Buffer Explorer. There are two major differences:

Buftabs is what you get when you try to implement Buftabline on a Vim that
does not yet have the tabline. It can only render your tabs near or at the
bottom of the Vim screen, and you have the choice between trading in your
statusline for the list, or having it flicker “behind” the command line. If
MiniBufExpl is too heavy for you, buftabs is the best you can do in absence
of the tabline.

I used this for a long time.

Essentially a newer rendition of buftabs.

If you already use Airline, you do not need Buftabline: the functionality
comes built in – see :help airline-tabline.

If you do not already use Airline, you may not want to: it is far heavier
than Buftabline, to the point of dragging down performance. C.f.
Pretty statuslines vs cursor speed

This is very similar in scope and strategy to Buftabline, but not nearly as

or Airline, it feels like a Big Plugin – one that requires a large up-front

does it make any attempt to harmonise with the user colorscheme.

This is another Big Plugin, though much, much better. It supports Vim tabs
in addition to buffers, and tries to implement a functionality that is not
native to Vim tabs: scoping buffers to certain tabs. This means it also
needs to hook into sessions in order to support them, which it does. All in
all, if you want to use Vim tabs (i.e. viewports), this is probably the best
plugin for you – Buftabline will be too simplistic for your preferences.